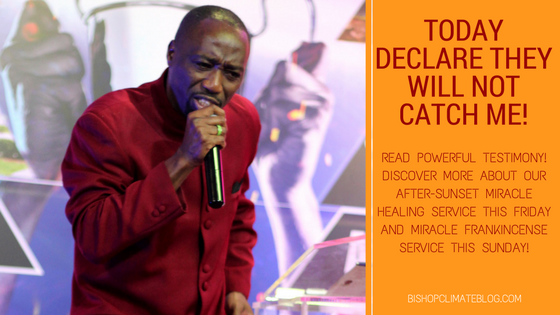 TODAY DECLARE THEY WILL NOT CATCH ME! From Bishop Climate

…TODAY DECLARE THEY WILL NOT CATCH ME! Read Powerful Testimony! 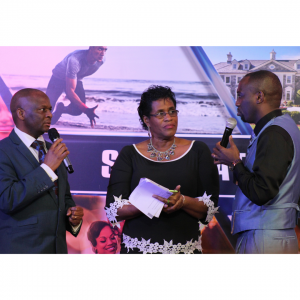 ” My life and the lives of others are really transforming here at The Kingdom Church. When I went to Jamaica I have a neighbour who hasn’t worked for 2 years! He tried everything but was experiencing obstacle after obstacle. When I came I bought the Miracle Pack for him and gave him the instructions of what to do. After he started using it just 3 days after was offered a job and was employed a permanent job! I also believe, man of God in the words of wisdom and knowledge that you have shared. I believed a prophetic word that you said about Miracle Money showing up in my mail! After I went to the mountain in Edinburgh for the Esther Banquet I found a big cheque in the mail! I am so happy and thanking God for this two incredible testimonies! ”  – Ms R.H , UK

What a powerful weekend we shared at TKC London! Great things are happening and powerful testimonies are being shared by the amazing things that is happening being apart of this ministry. Today I want to share something with you as today’s message is so sensitive, there are people around you that are trying to dismantle you emotionally, physically and even financially. But today what I’m about to share with you is something that your enemies have never thought or even expected. God is going to make for you one of the biggest escapes, where no-one is going to catch you!

” The Ziphites went to Saul at Gibeah and said, “Is not David hiding on the hill of Hakilah, which faces Jeshimon?” So Saul went down to the Desert of Ziph, with his three thousand select Israelite troops, to search there for David. Saul made his camp beside the road on the hill of Hakilah facing Jeshimon, but David stayed in the wilderness. When he saw that Saul had followed him there, he sent out scouts and learned that Saul had definitely arrived. Then David set out and went to the place where Saul had camped. He saw where Saul and Abner son of Ner, the commander of the army, had lain down. Saul was lying inside the camp, with the army encamped around him. David then asked Ahimelek the Hittite and Abishai son of Zeruiah, Joab’s brother, “ Who will go down into the camp with me to Saul?” “ I’ll go with you,” said Abishai. So David and Abishai went to the army by night, and there was Saul, lying asleep inside the camp with his spear stuck in the ground near his head. Abner and the soldiers were lying around him. Abishai said to David, “Today God has delivered your enemy into your hands. Now let me pin him to the ground with one thrust of the spear; I won’t strike him twice.” But David said to Abishai, “Don’t destroy him! Who can lay a hand on the Lord’s anointed and be guiltless? As surely as the Lord lives,” he said, “the Lord himself will strike him, or his time will come and he will die, or he will go into battle and perish. But the Lord forbid that I should lay a hand on the Lord’s anointed. Now get the spear and water jug that are near his head, and let’s go.“ (  1 Samuel 26:1-25 NIV )

On Sunday I shared with you, how the bible shows us David being chased and enticed by King Saul. Although David served King Saul, the King was enraged in jealousy and made it his mission to destroy David. But whatever trap King Saul tried to lure David into, David was able to escape time and time again. This is the same anointing that is available to you today! This is the anointing that speaks and will work on your behalf. Can you imagine three thousand people searching for one man? Three thousand people talking about, looking for, dreaming about one man! Yet David was innocent he did no wrong yet all these men were searching for him a command sent directly from the King.

“ So David took the spear and water jug near Saul’s head, and they left. No one saw or knew about it, nor did anyone wake up. They were all sleeping because the Lord had put them into a deep sleep.Then David crossed over to the other side and stood on top of the hill some distance away; there was a wide space between them. He called out to the army and to Abner son of Ner, “Aren’t you going to answer me, Abner? ” ( 1 Samuel 26:1-25 NIV )

Abner replied, “Who are you who calls to the king?” David said, “You’re a man, aren’t you? And who is like you in Israel? Why didn’t you guard your lord the king? Someone came to destroy your lord the king. What you have done is not good. As surely as the Lord lives, you and your men must die, because you did not guard your master, the Lord’s anointed. Look around you. Where are the king’s spear and water jug that were near his head?” Saul recognised David’s voice and said, “Is that your voice, David my son..?……Come back, David my son. Because you considered my life precious today, I will not try to harm you again. Surely I have acted like a fool and have been terribly wrong.”“Here is the king’s spear,” David answered. “Let one of your young men come over and get it. The Lord rewards everyone for their righteousness and faithfulness. The Lord delivered you into my hands today, but I would not lay a hand on the Lord’s anointed. As surely as I valued your life today, so may the Lord value my life and deliver me from all trouble.” Then Saul said to David, “May you be blessed, David my son; you will do great things and surely triumph.” So David went on his way, and Saul returned home.”

God was able to put King Saul and his trusted soldiers of the Army into a deep sleep where David was able to stand above his enemy and still spare his life. This will be you! This week you will become triumphant in all that you do! As we read further on David did stop even after this time, even after he blessed him and wished him to triumph, he continued his pursuit of him. But even till the end of King Saul’s life he did not catch him and neither will your enemies or anything else that has been bothering you continue in its pursuit of you. You will be the head and not the tail, you will overcome and you will be triumphant. See you this weekend be blessed. – Arch Bishop Climate Wiseman 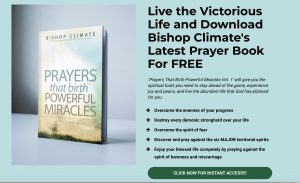 … we have a small favour to ask. More people, like you, are reading and supporting Bishop Climate Ministries, we made the choice to keep some of our materials open for all, regardless of where they live or what they can afford to pay.

Our deep spiritual editorial experience is second to none This means we set our own agenda and voice the most important and powerful information to set the captives free. Prophet Climate Spiritual Private Research Institute is free from commercial and political bias and not influenced by any religious organisation. This means we can give a voice to the nations, explore where others turn away, and rigorously challenge those in power and principalities .

We hope you will consider supporting us today. We need your support to keep delivering quality powerful deliverance messages setting the captives free one soul at a time Every reader contribution, however big or small, is so valuable. Support Bishop Climate Ministries from as little as £1 – and it only takes a minute. Thank you.